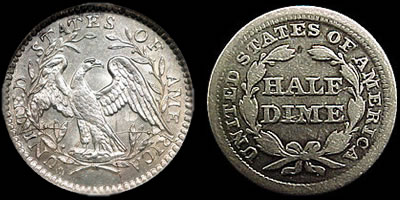 Prior to 1792, American Colonists had no officially recognized currency of to call their own. Trade was often conducted by way of bartering goods or services for others. And sometimes even tobacco was used to conduct trade. Various foreign currencies were recognized and used for commerce. But the Spanish Peso, or Piece of Eight was the most common of foreign coinage used. So much so, in fact that the Spanish Peso became the basis for future denominations of American coinage. The abbreviation for Spanish Peso was also the origin of our U.S. Dollar Symbol. These Pieces of Eight were silver coins that were cut into as many as eight pieces when change was needed.

Colonies did issue their own paper currency. But its value was not backed by gold. The Continental Congress also issued paper currency during the American Revolutionary War. But its value was backed only by the promise to be redeemable for gold after the war. With all this differing currency and even British Pounds Sterling being circulated, commerce must have been confusing.When the Constitution was adopted in 1787, the former colonies now states, were prohibited from coining money. Only gold and silver could be used as legal tender until Congress acted upon its new authority to produce a uniform currency.

In 1792, the United States Mint was constructed in Philadelphia, Pennsylvania. The U.S. Mint struck its first coins ever during the same year. These were silver coins known as Half-Disme. As the story goes, some of the silver used to produce these coins were donated from George and Martha Washington who lived nearby. However, the first actual circulating currency to be produced at the Mint was a batch of copper cent coins in 1793 under the leadership of newly appointed Director David Rittenhouse. The Philadelphia Mint (“Ye Olde Mint”) remained as the sole production facility of United States coinage until large deposits of gold and silver were discovered in the 1800’s. We’ll explore the origin of those facilities in the next installment of this series.